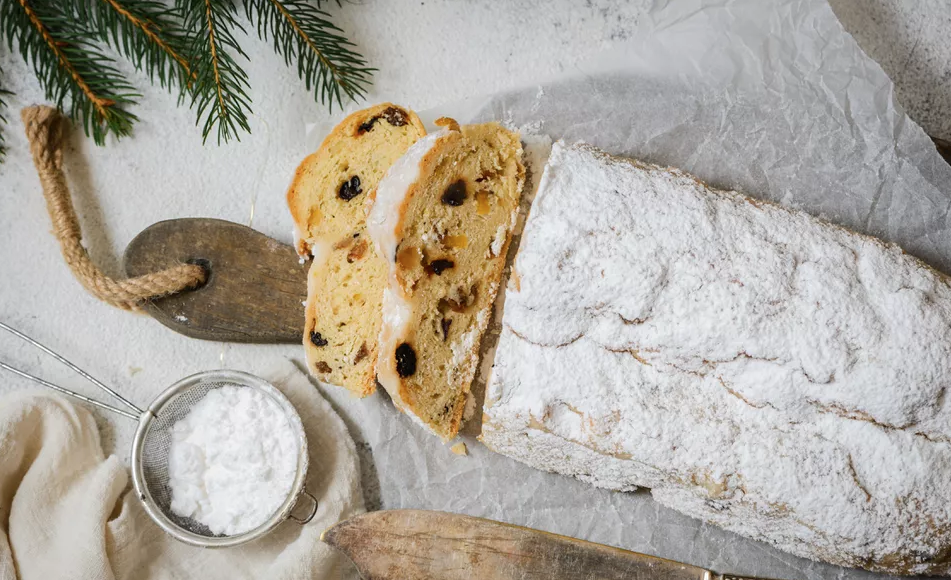 The holiday season offers us the chance to enjoy many traditions.  These traditions vary greatly from one culture to another.  One of the these traditions, during Advent, is the stollen.

A stollen is a type of sweet bread that originates from the Saxony region of what is now Germany.  The first stollen date back to the 14th century, but at

that time, the bread was not the sweet bread that it is today.  It was a fairly tasteless bread consisting of flour, oats and water.  Since this bread was baked during Advent, which was a time of fasting, the use of sugar, butter and other ingredients was prohibited by the Catholic church until 1490 when Pope Innocent VIII gave the first bakers permission to use butter.  Over the centuries since that time, other ingredients have been added to the bread like eggs, sugar, spices, dried or candied fruits and/or marzipan.

It is also said that the shape of the stollen is meant to symbolize the baby Jesus wrapped in his swaddling clothes.  The bread was baked at Christmas time to present to the nobility and church dignitaries during the Advent season.  At this time, it was also made to sell at fairs and festivals.  This tradition continued until 1918 with the fall of the German monarchy, but was started again in 1994 for the Christmas markets.  The most famous festival is Stollenfest, in Dresden, Germany.  Each year, a massive stollen is baked and passes through the streets of Dresden before being cut and shared throughout the crowd at the festival for a small sum which is then donated to charity.

Each year, we bring the Stollen to Culpeper during the holiday season for those who enjoy and celebrate this tradition.  Please stop by The Frenchman’s Corner to pick up your stollen as supplies are limited.