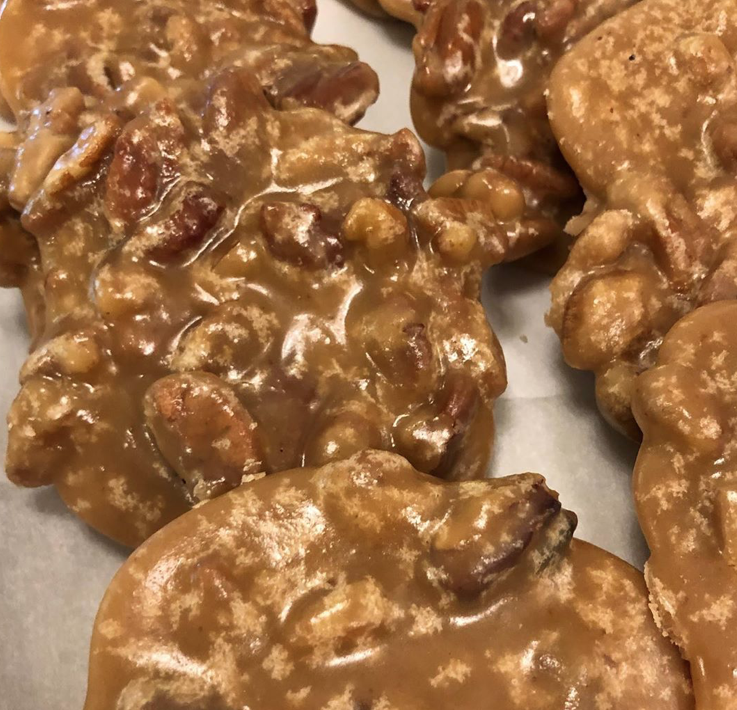 Praline may have originally been inspired in France by the cook of Marshal du Plessis-Praslin (1598–1675), with the word praline deriving from the name Praslin.  Early pralines used whole almonds individually coated in caramelized sugar, as opposed to dark nougat, where a sheet of caramelized sugar covers many nuts.   Through the centuries in Europe the “praslin” evolved into something different from the southern praline we know and love today. This candy in both France a

French settlers brought the recipe to Louisiana, where both sugar cane and pecan trees were plentiful.  Some believe that pralines may have arrived in New Orleans with the French Ursuline nuns. These nuns were tasked with teaching the young girls in their charge the domestic arts, which included cooking and how to make confections like the praline. As these girls married and moved throughout Louisiana and the rest of the south, the praline became a popular regional treat.  During the 19th century, New Orleans chefs substituted pecans for almonds since pecans were plentiful and almonds were scarce and difficult to obtain.  Cream was added to the butter, sugar and pecans to thicken the confection, and thus created what become one of the most loved confections from this part of the country; the pecan or Southern praline.

This beloved confection from Mississippi has made a return to The Frenchman’s Corner for limited time.  We invite all of our friends, neighbors and visitors to Culpeper to stop by and give them a try.  We believe that you won’t be disappointed.  You might want to also try the bourbon, Jack Daniels or cinnamon pecans that we carry in the store, which are also from Mississippi.  They make a great snack or a perfect stocking stuffer.